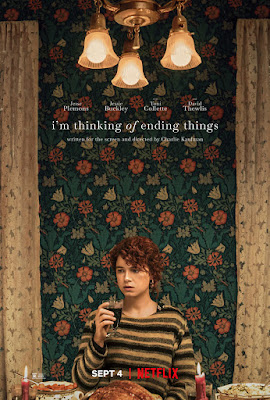 Charlie Kaufman is back! For those unfamiliar, he is the brilliant yet intensely strange writer responsible for Being John Malkovich and Adaptation, as well as the director (and writer, again) of Synecdoche, New York and Anomalisa. Importantly, he is also the writer of Eternal Sunshine of the Spotless Mind, my favourite film. His films are cerebral and strange but have a large cult following among a certain breed of film fan, among which I certainly count myself. He returns with I'm Thinking of Ending Things, produced and distributed by Netflix, a film which is likely to perplex even the die hard Kaufman fan. The premise is simple; a young woman is joining her boyfriend on a trip to meet his parents for the first time. They're leaving the city and heading toward a farm, heading there in the snow. The problem is, the young woman is thinking of ending things. Despite what I was saying earlier, about how Charlie Kaufman's films are cerebral and strange, they're usually not too hard to follow. Their plots have a linearity and structure which, while often troubled by the filmmaking, are robust enough that you know what you've just seen. I'm Thinking of Ending Things is not that, not that at all. It is a film which takes a simple premise and spirals wildly, almost deliriously out of control. I would actually compare it to a David Lynch film in how it takes a coherent narrative premise and goes to places you could only have dreamt of. But if you're planning on watching this film because you're hoping for rigid and predictable story telling, I should let you know very quickly that you are watching the wrong film.

In a just world, all four performers would be nominated for Oscars at this years ceremony.

There's quite a small cast at work in this film, a cast that can be boiled down into four or five main actors, actors who are all exceptional. As the parents, we have Toni Colette and David Thewlis. These are two actors who I have been a fan of for a while and who seem to be largely underappreciated. Colette has got much more attention since Hereditary but Thewlis rarely seems to get his chance to shine. Here, they have very odd roles, roles they breathe an incredible life into. They are terrifying and often hilarious in ways that I can't imagine many other actors nailing. Who the lead in this film is is an issue to debate but I'm going to say that Jesse Plemons is here in the supporting role. He's a brilliant actor, one who seems incapable of giving a bad performance and that is the case here too. At times, he is slimy and detestable, at others he is weak in a pitiable way. He is playing up all the most hated aspects of your typical Kaufman protagonist and does so excellently. My favourite of the cast though, both in general and in this film, is Jessie Buckley. Charlie Kaufman isn't famed for giving much time or weight to the female roles in his films but Buckley is given his best female character since Clementine, a female reflection of all the neuroses that usually infest his men. Her unsure narration peppers the film, adding an atmosphere of dread to the complex emotions she's already demonstrating. There are extended sequences in this film which are almost entirely dialogue and the way she says something compared to how she looks saying it brings a majority of the emotional complexity to the film. In a just world, all four performers would be nominated for Oscars at this years ceremony.

Kaufman is always given deserved credit for his screenplays and brilliantly realised execution of bizarre ideas, but before I get to that, it's worth crediting him for his most (and I'm already sorry for this description) cinematic film yet. I mean no offence to Synecdoche or Anomalisa, both films I love dearly, but they are films whose greatest strength are their screenplays. With I'm Thinking of Ending Things, for the first time in a Kaufman directed film, the visuals are incredible. He's teamed up with Lukasz Zal, the cinematographer of Cold War, to create a film that is visually stunning. The aspect ratio has been crushed, something many are going to find strange on their TV, but it's used to give a height and isolation to the scenes. The importance of the visual is also highlighted in the way things slowly change, in ways that might feel less important in his other work. These visuals also aid to a horror ambience throughout the film. Though still nothing close to what most audiences would consider a horror film (don't expect any jump scares here), there's a nauseating tension throughout, brought out by the feeling of wtf-ness. Did her jumper change? Wasn't he older in that last shot? Why won't that dog stop shaking? Kaufman's willingness to collaborate brings his work even greater power than it could otherwise carry.

What I find fascinating about I'm Thinking of Ending Things is that it is both the most and least Kaufmanesque film Charlie Kaufman has ever made.

As a final point though, I want to talk about Ending Things as a Kaufman film, something I clearly haven't done at all throughout the rest of this review. The screenwriter is an essential but often dismissed aspect of filmmaking, an aspect that film criticism can often disregard in order to praise the director more and though Kaufman plays the dual roles of director and screenwriter here, it's always as a screenwriter that I think of him. What I find fascinating about Ending Things is that it is both the most and least Kaufmanesque film he has ever made. On the one hand, it's based on a novel, making this the first adapted screenplay he's had made since 2002, but then again it is a story about loneliness and death, a story which is infused with deeply cineliterate references and odd jokes, all while completely disregarding any conventional ideas of a three act structure. If I were to map out what happens in the film and what it's about, it would seem incredibly Kaufmanesque but what I love is that presented on screen, these familiar aspects become strange. As a fan of his work, it becomes an incredibly rewarding watch, adding to the horror elements of the film in which recognisable things become twisted out of recognition. Like I was saying earlier though, it's also the first of his directed films where the visuals feel like a total stand-out. Being John Malkovich and Eternal Sunshine both had very distinct visual styles, but they weren't directed by Kaufman and as an expression of his artistry, it's the most impressive I've yet seen. Even if this isn't your favourite Charlie Kaufman film, I feel like you would be hard pushed to argue it isn't one of his most impressive.

I have a feeling I will be thinking and dreaming about this film for the rest of the year.

Despite my incredibly high praise, I am not actually going to recommend this film to most of you, because it is exceptionally strange. If you have a taste for the surreal then go for it, this film should push you in ways you find interesting. For most people though, that push may be over the edge. As someone who has long been over the surreal edge, I loved this film and cannot stop thinking about it. I have a feeling I will be thinking and dreaming about it for the rest of the year and therefore, I am very happy giving I'm Thinking of Ending Things a 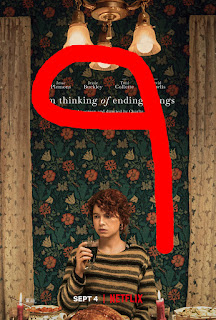 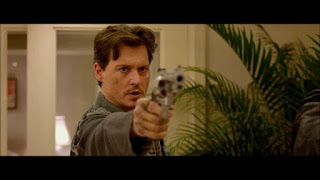 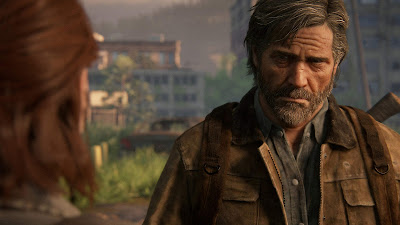 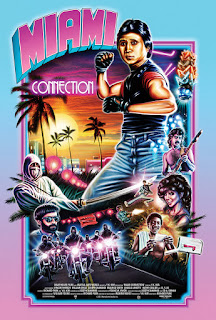